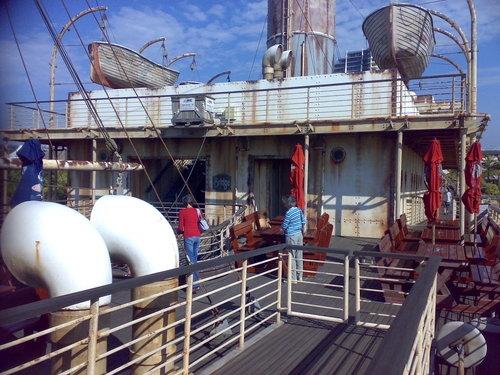 Arguably the most exciting landmark of Durban's famous Golden Mile is uShaka Marine World. One of Durban's best known tourist attractions, it is located just north of the harbour entrance, and is surrounded by the burgeoning Point Waterfront Development. Situated on 15 hectares of prime beachfront land, uShaka is Africa's largest marine theme park, and amongst its numerous attractions boasts the fifth largest aquarium in the world. Its Wet and Wild water park offers an array of exciting fun rides for children, and a beachfront shopping mall is there for the less adventurous. It truly does offer a whole new world of fun and entertainment.

The centre-piece of uShaka is a remarkable replica of a shipwreck - looking suitably battered, rusty and weathered -- and yet mysterious as well -- its characteristic profile is visible from afar. Remarkable? Yes! But that's before you knew what lay within! The cool, dark interior of the Phantom Ship's stern is the Cargo Hold, one of Durban's most remarkable restaurants. Seemingly part of the wreck of the 1920s steamer, its the perfect place to compliment the thrill and adventure of uShaka itself - with some fine dining. As if run aground between rocks and lagoons, the Phantom Ship is masterfully incorporated into the aquarium and water park, with much of the famous aquarium lying beneath it and with one of the water rides running right through it.

Naturally The Cargo Hold restaurant has a nautical theme, and is festooned with marine artefacts from a bygone era. The restaurant itself has two levels, and patrons can see huge sharks swimming in a vast tank which forms one of the restaurant's walls. This magnificent backdrop to the dining experience is a vista that will never be forgotten.

But once you have taken your eyes off the view, it's time to settle down and think about the food! The Cargo Hold restaurant has an extensive menu offering dishes from around the world and with fresh seafood from the Indian Ocean. If you are not interested in a la carte, nautical-themed set menus are also available. Just about everything to tempt the taste buds is there, from ostrich salad through fresh oysters, to family favourites, impressive platters and tempting desserts. The Cargo Hold is open for both lunch (12h00 to 15h00) and dinner (18h00 to 22h00).

So if you desire a seafood encounter of the most novel kind, or a private function with a difference, or an upmarket, yet thrilling finale to your day at the beach, take time to consider The Cargo Hold restaurant. Join the other passengers on a culinary voyage of a lifetime.