Tours by Region Tours by Type 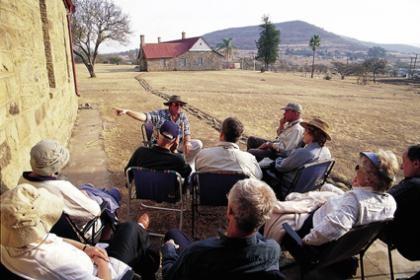 Durban is ideally positioned in KwaZulu Natal for excursions to other parts of the Province. Whether they be day trips up or down the coastline, trips to the provincial capital Pietermaritzburg about 90 km away, or longer excursions to the game reserves in northern KwaZulu Natal, or even the Drakensberg Mountains. There are an infinite number of tours and possibilities available to people visiting the city of Durban.

KwaZulu Natal has a rich history, which is a reflection of its multicultural heritage and fascinating colonial past. A setting for several military encounters in the 19th and early 20th centuries, many parts of the Province are steeped in history. And fascinating theory at that. Much has been written about the Anglo-Boer war, but more so about the Anglo-Zulu war of 1879 - immortalised in the Hollywood film 'Shaka Zulu' and setting for the dramatic defeat of Queen Victoria's army at Isandhlawana. One of the worst defeats of its kind in British history. Such rich history! But how do you use this opportunity to live the history and recall celebrated encounters?

Your answer comes in the person of Ken Gillings, a Durban-based military historian extraordinaire, registered National Tourist Guide and specialist Battlefield Guide renowned throughout South Africa and abroad. Ken Gillings is a retired military man and has conducted tours around the battlefields of KwaZulu Natal and South africa, and is also a member of the South African Military History Society, The Ladysmith Historical Society, the South African National Society and the KwaZulu Natal Heritage Foundation. His research into the battlefields of KwaZulu Natal has produced numerous books and he has written articles on the subject.

Ken Gillings has studied the history, heritage and traditions of Zululand throughout his life, and has spent a great deal of time exploring the rural areas of KwaZulu Natal, which he now knows intimately. Ken Gillings has also lectured extensively and is known to enthrall his audiences. He has an unbeatable track record and pedigree - just right to bring all the glorious history alive. Why not try a tour of the KwaZulu Natal battlefields with him today?